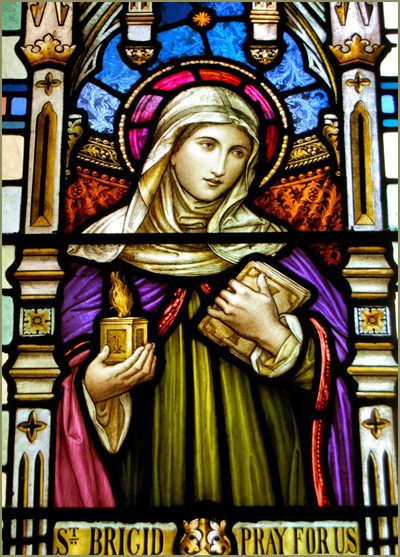 Saint Brigid lived in Ireland in the 5th century; a holy woman, granted by the grace of God, great gifts of spiritual leadership, devotion in prayer, patience and compassion. Brigid is probably the best-known Irish saint since Saint Patrick, the patron saint of Ireland. She was born in County Kildare around the year 457. It is widely believed that her parents belonged to noble families, and it is generally accepted that her father, Dubtach, was a Christian.

Refusing many offers of marriage, Brigid became a nun and received the veil from Saint Macaille, the abbot and bishop of Longford. With seven more women she founded the Convent of Cill-Dara, the Church of the Oak. Saint Brigid’s small convent quickly became known as a great center of religion and learning. Today a major city, Kildare, stands on that same location. Saint Brigid also founded several monastic institutions and schools, which explains why she has always been regarded as a “patroness of students”.

Saint Brigid traveled extensively throughout Ireland, carrying on the great work begun by Saint Patrick, but there is no real evidence to suggest that they ever met. Brigid was one of the most remarkable women of her times, and despite the numerous legendary, extravagant, and even fantastic miracles attributed to her, there is no doubt that her extra-ordinary spirituality, boundless charity, and compassion for those in distress were real.

The best-known story about Brigid is of her visit to a dying pagan chieftain, who after days of semi-consciousness, awoke to find Saint Brigid’s Christian Cross on his chest and Saint Brigid praying beside him. Thankful to God’s graces for saving him, soon afterward he converted and was baptized by Saint Brigid, along with his entire village.

February 1 is Saint Brigid’s “feast day”, and it is still customary to obtain a cross at that time, in the hope of receiving the saints blessing. The phrase, the “Queen of the South: the Mary of the Gaels,” in other words, “Brigid and Mary Be With You,” has been applied to her, not just in Ireland, but worldwide, for she has been honored and respected all over the world.