This Sunday we begin “Catholic Schools Week” as we focus on the value and importance of Catholic education.  The theme this year is “Catholic Schools: Faith, Excellence, Service.”  Our Holy Father, Pope Francis places a high value on the need for faith-based Catholic education.   As noted by the Archdiocese of Hartford, Pope Francis expressed his belief that parents should have the right to choose a “moral and religious education” for their children.  He has been personally involved in Catholic education since his time as a young priest when he taught literature and psychology for years at a Catholic high school, and then later taught theology at a Catholic college. 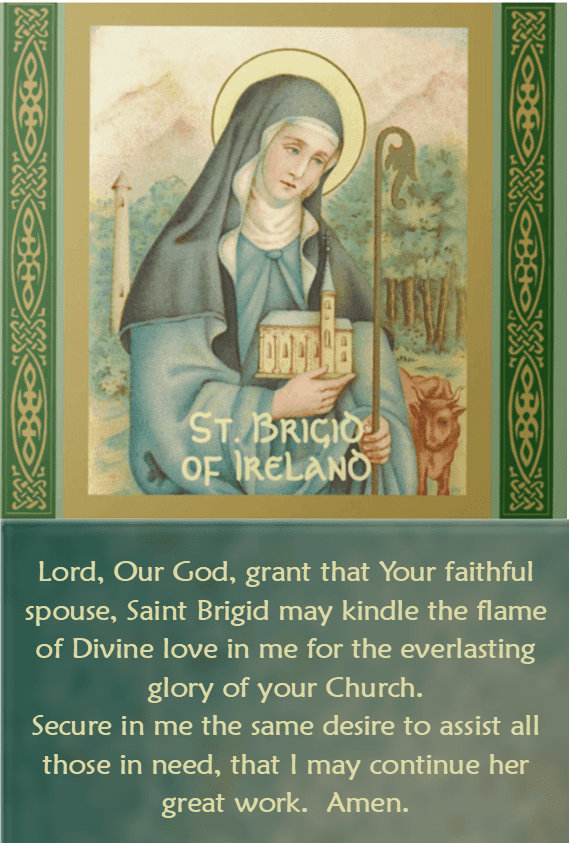 As we celebrate “Catholic Schools Week”, it is appropriate to note that this coming Monday we will also celebrate the feast day of Saint Brigid of Kildare, the patron saint of our Parish.  She is also the patron saint of students.  Catholic education was very important to her.  Saint Brigid worked to see that the Catholic faith was taught clearly and thoroughly, and she founded several schools.

As reported by the publication “Catholic News Agency” (CNA), Saint Brigid was an Irish Christian nun who was known for her extraordinary spirituality.  Her life was rooted in prayer.  She worked tirelessly to spread the gospel of Jesus Christ, and traveled widely throughout Ireland, founding many convents and fostering vocation awareness.  Many were led to the Catholic faith through her words and actions.

CNA indicated that Saint Brigid also did “manual labor: clothmaking, dairy farming, and raising sheep.”  It stated that “This communal combination of work and prayer attracted vast numbers of people” to her ministry.  Under her leadership, CNA acknowledged that “Kildare played a major role in the successful Christianization of Ireland.”   Along with Saint Patrick and others, Saint Brigid had a major influence in making Ireland a Christian nation.

As previously noted, Saint Brigid is also associated with Christian charity and is celebrated for her generosity to those in need.   It was said that she could not bear to see anyone cold or hungry since she truly believed that Christ dwelt in every person.  She labored among the less fortunate with love and compassion.  Her love of God and love of neighbor were obvious to all who knew her.

As we reflect on her many contributions to our Catholic faith, we can proudly say, Saint Brigid, intercede for us; Saint Brigid, patron of our parish, pray for us.

February 1st is the Feast Day of Saint Brigid of Kildare, Ireland.  (452 – 525)   We celebrate this special day within our Sunday Mass liturgies this year.  The prayers, scriptures, and hymns will be those of the Feast rather than the  4th Sunday in Ordinary Time.