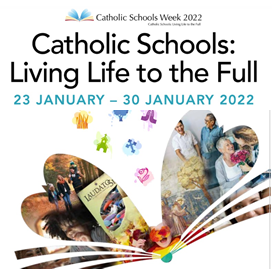 This Sunday marks the beginning of “Catholic Schools Week.”  The theme this year is “Catholic Schools: Living Life to the Full.”  Catholic education has always been a priority for the bishops of our nation.  They have strived to make Catholic schools accessible and affordable despite the increasingly secular environment in our society, rising tuition costs, and other challenges facing Catholic education, including the challenge of how to best educate students in the midst of the sustained impact of the COVID-19 virus.  For many years, Catholic schools had been staffed primarily by dedicated nuns, religious brothers, and priests.  They are now staffed primarily by dedicated lay teachers who truly view teaching as their vocation.  These teachers strive to educate and form students who will embrace and spread the faith.

As we celebrate Catholic Schools Week, it is appropriate to note that this coming Monday we will also celebrate the feast day of Saint Brigid of Kildare.  She is one of the patron saints of Ireland.

Saint Brigid was an Irish Christian nun who was known for her extraordinary spirituality.  As reported in the media outlet, “Catholic News Agency”, Saint Brigid “traveled widely throughout the island, founding new houses and building up a uniquely Irish form of monasticism.  When she was not traveling, many pilgrims – including prominent clergy, and some future saints – made their way to Kildare, seeking the advice of the abbess.”  Many laypeople would travel long distances to seek her spiritual counsel.  Many were led to the faith through her words and actions.

As previously noted, Saint Brigid worked tirelessly to spread the gospel of Jesus Christ, founding many convents and fostering vocation awareness.  She organized communal consecrated religious life for the women of Ireland.  Her focus on communal prayer and work attracted many followers.  Along with Saint Patrick and others, she played a major role in making Ireland a Christian nation.  Saint Brigid is also associated with Christian charity and is celebrated for her generosity to those in need.    It was said that she could not bear to see anyone cold or hungry since she truly believed that Christ dwelt in every person.  She labored among the less fortunate with love and compassion.  Her love of God and love of neighbor were obvious to all who knew her. 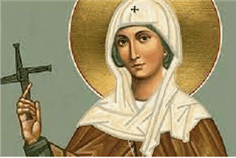 Please join us in celebrating the legacy of this great saint.

Saint Brigid, intercede for us.

Saint Brigid, pray for us.