As we know, we are currently in difficult and uncertain times due primarily to the devastating impact of the Covid-19 virus.  Very few could have predicted the drastic changes that have occurred in our society in a very short time.  We recently went from crowded Churches to empty Churches.  Most Church services were suspended throughout the nation and in many parts of the world.  Catholics could no longer attend Mass and receive the Eucharist for an indefinite period.  Many previously scheduled marriages and baptisms were deferred to a later time to be determined.  The faithful found it difficult to avail themselves of the Sacrament of Reconciliation.  Some Catholics were disappointed and frustrated primarily with the actions of various diocesan bishops and felt they were unfairly being denied the sacraments.

Canon 843.1 states, “Sacred ministers cannot deny the sacraments to those who seek them at appropriate times, are properly disposed and are not prohibited by law from receiving them.”

Msgr. Charles Pope, writing in the publication “Our Sunday Visitor”, addressed the concerns of those who believed the bishops or civil authorities were denying them access to the sacraments.  He stated, “While it is true that the faithful have a general right to have access to the sacraments, it is not an absolute right.”  For “… grave reason, a bishop can forbid the celebration of Masses in certain areas for a certain time.”

He noted that due to the Covid-19 virus, “Public health authorities have asserted that a serious threat exists to the well-being of others and have decreed that a wide number of activities cease in the meantime, including large public gatherings.”  He went on to indicate that, “It is true that the Church should generally resist attempts by the state to limit our religious liberties but that is not what is happening here.  Government officials did not single out Catholic Masses or religious activities.  Rather they issued norms and later decrees limiting all public gatherings in various ways.”  However, many people expressed their view that these norms and decrees were unreasonable, and in some instances, unfair to religious institutions. 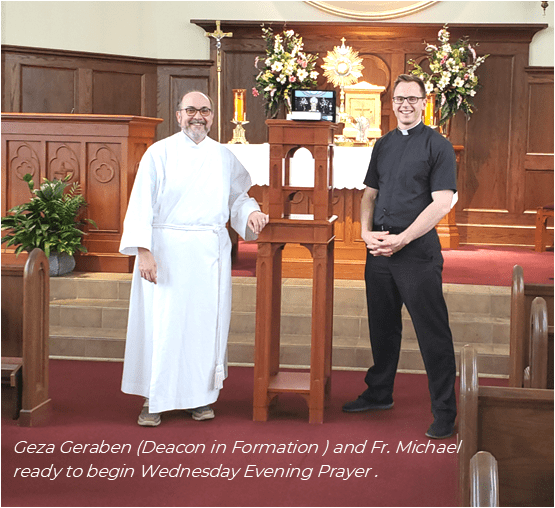 Msgr. Pope urged patience and stated, “We should be sympathetic to both those who have fears about the virus and to those who have sadness at the loss of the celebration of the liturgy publicly.  Some fairness is also due to the bishops who themselves are facing a situation unprecedented in most of their lifetimes.  The varying responses reflect varying local conditions and decrees.”

He reminded the faithful that, “As for denying the sacraments in general, most dioceses have made exceptions.  The faithful who are ill can still be anointed and receive Communion.  Funerals, weddings, and infant baptisms can still take place, though limited in most places to immediate family.”

As we consider the insightful comments of Msgr. Pope, and as civil, commercial, and religious institutions are gradually opened up once again, we are invited to pray for our bishops.  We may pray, that inspired by the Holy Spirit, and giving due consideration to health concerns, they will make prudent decisions that will allow our Catholic faithful to attend Mass and avail themselves of the precious sacraments of our Church for which they so eagerly hunger.